Sections in this article

When a transaction is submitted to the root node for inclusion in a block, it goes through the following stages:

This document will describe each stage in depth. A block diagram is included at the end.

The mempool can contain a maximum of 65,534 transactions. This limit is due to Minimum Viable Plasma’s fixed Merkle tree depth of 16 and the fact that 1 transaction is the root node’s fee transaction.

Plasma will create new sidechain blocks according to the following rules:

If there are no transactions in the mempool, Plasma will not create new blocks. The smart contract explicitly forbids insertion of empty blocks.

Once a block is created, all gRPC calls that inserted transactions into that block will receive an ‘inclusion receipt.’ The inclusion receipt is used to generate the appropriate confirmation signatures now that the transaction has been assigned a block number and an index within the block.

At this point, the transaction is spendable by the recipient.

Plasma periodically submits the Merkle roots of sidechain blocks to the Ethereum blockchain for finalization. Plasma blocks are currently submitted as soon as they are created, however in the future configurable finalization rules may be supported. Note that because there is a large difference between Ethereum’s block time and Plasma’s, block submission may lag behind block creation significantly. As such, blocks are written to an in-memory queue prior to submission.

See the diagram below for an overview of how everything fits together: 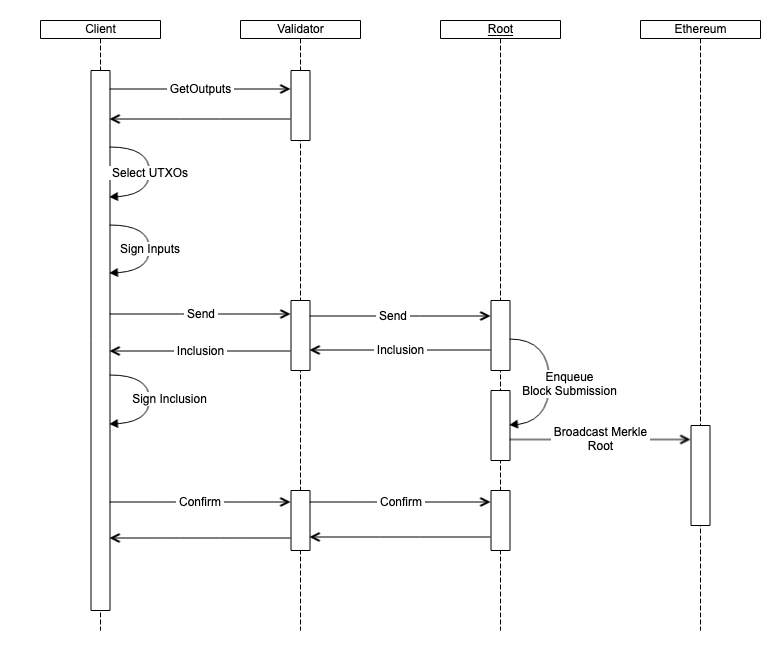